Season 3 of She-Ra and the Princesses of Power is set to debut on Netflix on August 2. Oscar-winner Geena Davis has joined the third season of DreamWorks’ GLAAD and Emmy-nominated Netflix original series She-Ra and the Princesses of Power in a recurring guest role. On Friday, She-Ra executive producer Noelle Stevenson joined Davis onstage at the Bentonville Film Festival to share the news during a fireside chat discussing representation and inclusion in entertainment titled “She for She: Power of the Pack.”

Davis voices a character named Huntara, the imposing de facto leader of the Crimson Waste who reluctantly helps Adora, Glimmer and Bow on a quest. 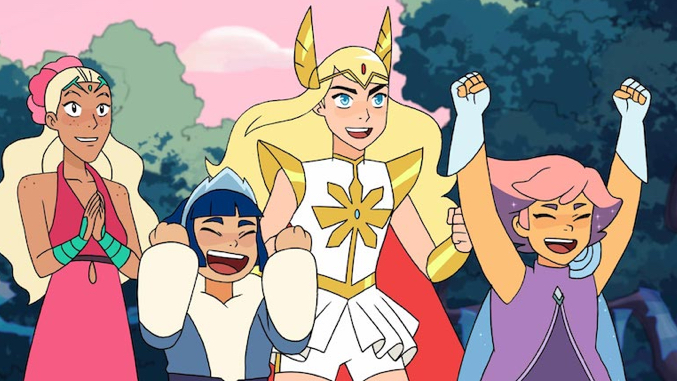 Executive produced by Noelle Stevenson, She-Ra and the Princesses of Power is the story of an orphaned princess named Adora, who leaves behind her former life in the evil Horde when she discovers a magic sword that transforms her into the legendary warrior She-Ra. Along the way, she finds a new surrogate family in the Rebellion as she unites a group of magical princesses in the ultimate fight against evil.

About the Bentonville Film Festival

Co-founded by Academy Award® winner Geena Davis & Inclusion Companies CEO Trevor Drinkwater, the Bentonville Film Festival is a one of a kind annual event that champions inclusion in all forms of media. BFF is a yearlong platform, culminating with an annual six-day festival, in partnership with founding sponsor Walmart and presenting sponsor Coca-Cola. The Bentonville Film Festival is held the first week of May of every year in Bentonville, Arkansas and includes an impactful Inclusion, Research and Content Summit. Connecting engaged entertainment industry leaders and major corporate change makers with a diverse array of storytellers affords BFF the unique opportunity to amplify commercially viable content, and champion stories that adequately represent the world around us. Because if they can see it, they can be it! www.bentonvillefilmfestival.com.

Check out these awesome new DreamWorks She-Ra and the Princesses of Power T-Shirts! All official #SheRa shirts are now available on Amazon! Solid colors: 100% Cotton; Heather Grey: 90% Cotton, 10% Polyester; All Other Heathers: 50% […]

Review: The Toys That Made Us – He-Man (Netflix)

Masters of the Universe: Revelation Prequel Comic by Dark Horse

Masters of the Universe: Revelation is an upcoming Netflix animated series directed by Kevin Smith. No premiere date has been given yet, but Dark Horse Comics has just announced plans to release a prequel comic set […]