Elaborate cinematic universes and sophisticated marketing tie-ins are commonplace in entertainment today. It’s easy to forget that the transmedia trend began in 1982 with a barbarian action figure. He-Man and the other characters in Mattel’s popular Masters of the Universe toy line quickly found their way into comic books, video games, multiple television series and a Hollywood film. The original animated series (1983–1985) was the first based on an action figure, and the cult classic Masters of the Universe (1987) was the first toy- inspired live-action feature film.

But it wasn’t easy. He-Man faced adversaries more dangerous than Skeletor: entertainment lawyers, Hollywood executives, even the Reagan administration. The heroes and villains of Eternia did more than shape the childhoods of the toy-buying public—they formed the modern cinematic landscape. 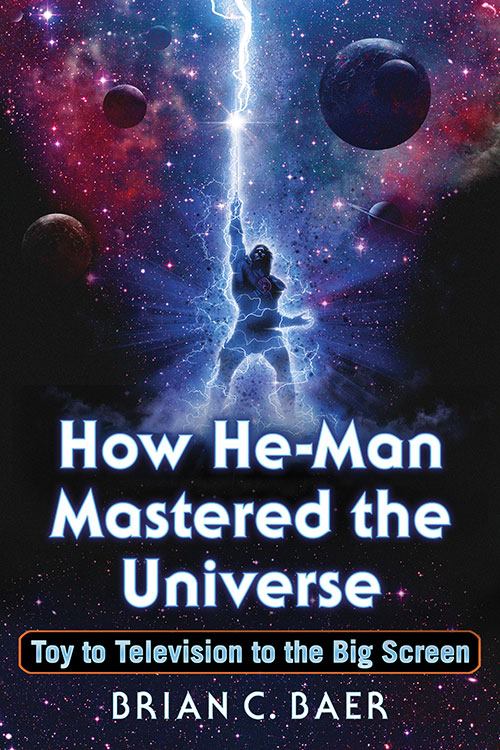 “This book is a wonderfully meticulous exploration into the He-Man and the Masters of the Universe phenomenon! Brian C. Baer has done a fantastic job!”

— JAMES EATOCK, HE-MAN AND SHE-RA: A COMPLETE GUIDE TO THE CLASSIC ANIMATED ADVENTURES

“How He-Man Mastered the Universe is an entertaining and insightful look into the He-Man franchise and its effect on later media franchises. Essential reading for anyone interested in reading about the evolution of the modern media franchise.”

— JESS NEVINS, THE EVOLUTION OF THE COSTUMED AVENGER: THE 4000-YEAR HISTORY OF THE SUPERHERO

“Finally a comprehensive history of one of the greatest (if not the greatest) action figure line in the history of human civilization! Baer digs deep, and shows the influence of a hero who became much more than 5 inches of plastic.”

— TIM SEELEY, THE ART OF HE-MAN AND THE MASTERS OF THE UNIVERSE AND REVIVAL

New from Mondo! This Limited Edition “Classic” Variant of Hordak (Power-Con exclusive) comes in a new blue color way, with a new “classic” head portrait and comes with the exclusive Imp mini figure. Other accessories […]

Redesigning the entire He-Man franchise for a live-action film debut would seem a daunting task to just about anyone. A designer would have to somehow maintain the eclectic mix of sci-fi and fantasy elements under […]