Masters of the Musical Universe: Battle for Etheria
A review by Brian C. Baer

When it hits 7:45, the curtain’s rise for “Masters of the Musical Universe: Battle for Etheria” is 15 minutes late. The cause of the delay is clear, though, as the crew at Portland’s Headwater Theatre struggles to squeeze in a few more folding steel chairs to accommodate the sell-out crowd.

The audience waits, chatting with one another about their memories of the beloved 1980s franchises, “He-Man and the Masters of the Universe” and “She-Ra: Princess of Power”. There are discussions about the best cartoon episodes or favorite action figures, but there are some who admit to never having seen the popular shows.

Then, one ghastly, skeletal hand reaches through the black curtain, clawing at the audience. The reaction is a mixture of chuckles and cheerful “Ooohs,” as everyone plays along. That image set the stage for “Battle for Etheria” – a play that is half played for good-natured laughs and name-checking ’80s pop culture, and half embracing the youthful joys of blonde heroes and heroines fighting silly cartoon villains. 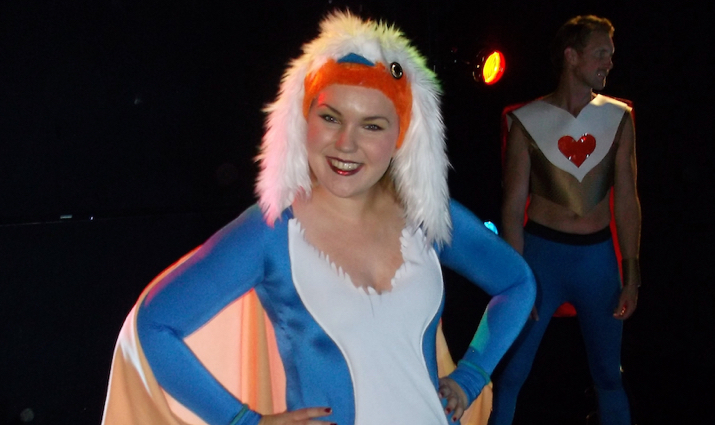 “Battle for Etheria” is a sequel to 2015’s successful first installment of Masters of the Musical Universe. According to writer/co-director Meghann Trause, both plays are “a love letter” to those cartoon series, and that love is obvious in the production, from the faithfulness of the costumes to the various Easter eggs hidden within the script. While the crowd eats up the ’80s pop music soundtrack, they laugh just as hard when Beast Man accuses Skeletor of failing to capture Castle Grayskull “at least 130 times in the 1980s alone”.

The plot is original, but recalls some aspects of “Secret of the Sword” and the other classic He-Man/She-Ra team-up stories. Evil-Lyn impersonates She-Ra to try to gain access to Grayskull, but is caught when the Sorceress senses She-Ra is back on Etheria and in need of He-Man’s help. Our heroes venture of the sister planet to help out and meet She-Ra supporting characters like Bow and Madame Razz. Skeletor decides to team up with the evil Hordak as well, thinking if they can defeat both heroes, then Eternia will be his for the taking. When Hordak tries to betray Skeletor, Skeletor betrays him back, handing the victory to the good guys.

The play moves briskly and is consistently silly and irreverent, full of innuendo and show-stopping musical numbers. On occasion the action, characters, music, and choreography come together in perfect harmony. One such highlight is the introduction of Maya Papaya as She-Ra, as she battles Catra and Shadow Weaver and all three sing “Black Cat” by Janet Jackson. 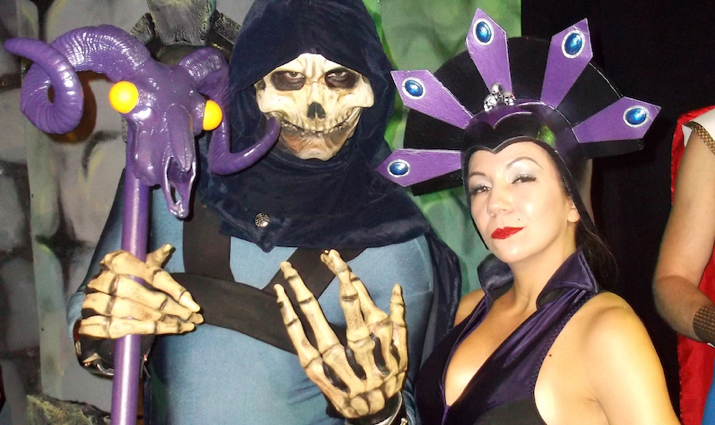 John Branch’s Skeletor is a delight, always riffing with the audience and improvising with his fellow actors. Nearly every scene is stolen by him. Melissa Hanson is the best adaptation of the scheming, sarcastic Evil-Lyn fans may ever see. Nick Dent (Prince Adam/He-Man) and Kellee June Korpi (Teela) are similarly phenomenal as they throw themselves wholeheartedly into actions or dialogue – not to mention outfits – which would scare away more timid performers.

The play’s biggest laughs come from the inclusion of Bow, the Etherian heartthrob who enters and exits the stage in slow motion, set to the song “Oh, Yeah” from “Ferris Bueller’s Day Off”. Everyone who meets the Great Rebellion’s archer is instantly smitten, leading Prince Adam, Teela, and even Skeletor fighting over who gets, ahem, “special alone time” with him in the Whispering Woods.

The humor definitely skews towards an adult audience, one that grew up with the characters and would enjoy watching them being lovingly poked at. The humor is also very effective, self-aware and over-the-top, so the play is enjoyable for more than just the traditional He-Man and She-Ra fans. And that is where the true creative success of the play lies. 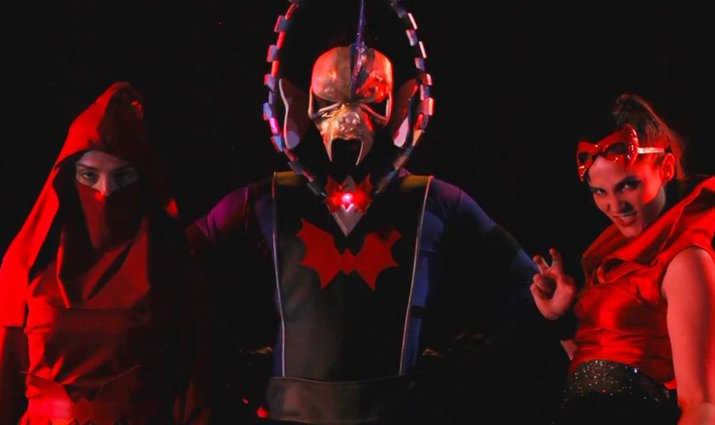 Trause and her co-director, John-Ryan Griggs, manage to open up a niche property and make it accessible. “Masters of the Musical Universe: Battle for Etheria” is exhaustingly funny, exceptionally clever, and just a damn good time. It’s a breath of fresh air, steeped in nostalgia and charm. It could be recommended to just about anyone.

For those dedicated fans, however, it’s more important than that. Beyond the inside jokes and references, there’s something very affirming about “Battle for Etheria”. Our favorite characters have been paired with the most memorable aspects of the 1980s, making Skeletor as important as Michael Jackson and Evil-Lyn as iconic as the theme from “Flashdance”. The play makes the case for “Masters of the Universe” and “Princess of Power” as essential bits of popular culture.

With the resurgences of franchises from the ‘80s and ‘90s, and amid the constant rumors of a new He-Man film, “Masters of the Musical Universe” shows us why these characters matter and just how welcome they are in 2016. Before the inevitable reboot, we’d be lucky to get another play or two from these talented creators.

The last new Super7 x Masters of the Universe releases arrive with the Battle Cat and Panthor ReAction Figures! Now Available: https://super7.com/collections/m-o-t-u As this year comes to a close maybe it’s time to treat your […]