He-Man fan Rofe is a graphic designer and comic book artist from Argentina. Check out his great MOTU artwork!

Here in Argentina, He-Man and the Masters of the Universe was a huge success. As a kid, I remember me and all of my friends playing with He-Man action figures. My favorite: Man-E-Faces (I still have him!)

My He-Man illustration was initially made for my son. After uploading the picture to my Facebook and Instagram accounts, I received a lot of messages asking for more illustrations of the characters (He-Man, Battle Cat and Skeletor), so I happily made some more. I plan on making some more illustrations from the series in the near future, including Man-at-Arms, Beast Man, and of course, Man-E-Faces! 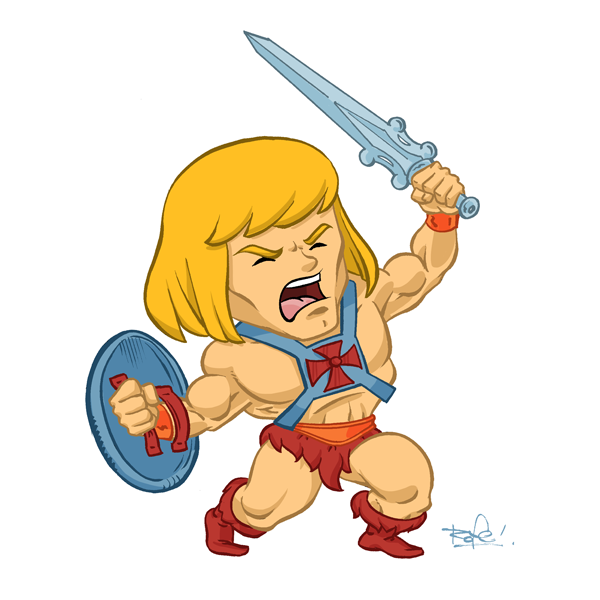 You can see more illustrations by Rofe at http://www.rofe.com.ar
Tumblr: http://rofecomics.tumblr.com/

Check out these awesome fan-made “Anti He-Man” cartoons, created in the Filmation style, by artist Dusan M. Backstory: Keldor, a fugitive from a parallel universe, arrives on Eternia. He is followed by the master of evil – Prince […]

Exclusive from Funko! Glittery pink & black Hikari XS Skeletor 2-pack! These vinyl figures measure in at about 4-inches in height. The Pink & Black Skeletor Hikari XS 2-pack is a Funko Shop exclusive and is […]

Today is the 15th Anniversary of the “He-Man and the Masters of the Universe” cartoon series from Mike Young Productions. In celebration of the anniversary of this award-winning series, we invite you to check out the […]