Let’s get this out of the way: Animoca Brands’ HE-MAN: TAPPERS OF GRAYSKULL is not an action game like He-Man: The Most Powerful Game in the Universe.

In He-Man Tappers of Grayskull, the evil Skeletor (voiced by the iconic Alan Oppenheimer) finds a magic artifact that allows himself and most of He-Man’s regular rogue’s gallery to grow to giant-size. Prince Adam (voiced by MYP He-Man actor Cam Clarke) discovers the plan and transforms into He-Man to stop him. 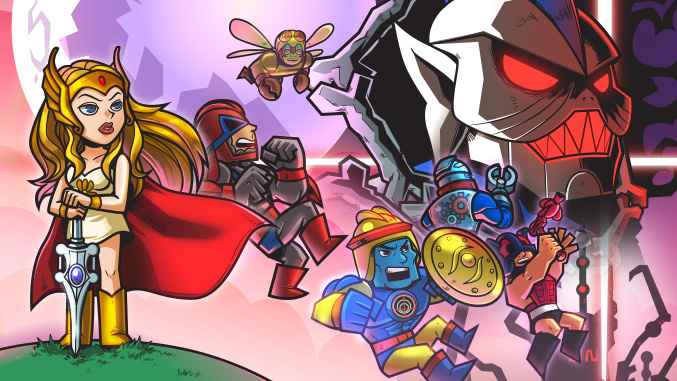 Along the way, He-Man is aided by his many allies, from the usual Teela and Man-At-Arms to the latter day MOTU characters like Clamp Champ and Gwildor, with surprise characters eventually joining the fray, such as She-Ra, The Goddess and Queen Marlena. These secondary characters flank the giant villain using their trademark attacks and use their passive abilities to buff the heroes. Every new character who joins the battle is very powerful at first, but the difficulty soon ramps up to compensate. The player only controls He-Man, while the other Masters attack automatically. In fact, the player could let the other Masters defeat enemies without intervening as He-Man.

Fighting alongside of the Masters as He-Man earns money and defeats enemies much faster. The actual game continues when the game is turned off, so the Masters will continue fighting enemies and earning money, until the game is turned on again. As He-Man himself goes up in level, he gains many new temporary power-ups to aid him against the forces of evil. He-Man can summon the faithful Battle Cat to battle or use Orko’s Funds to double the amount of gold earned. 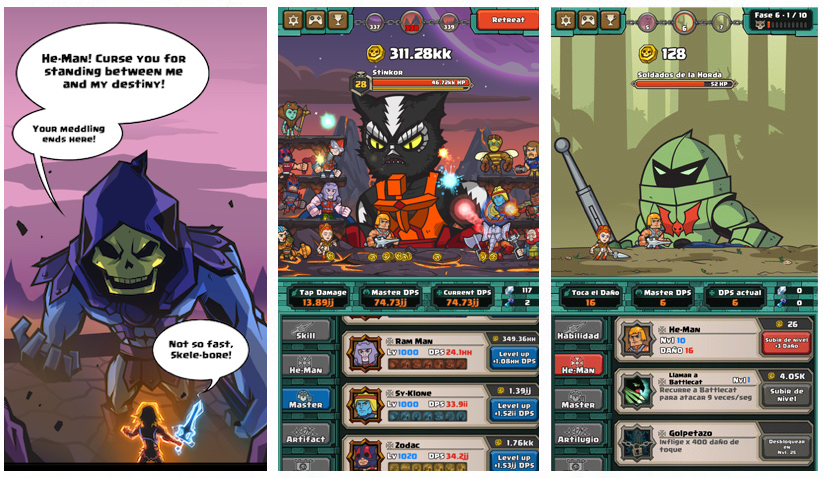 He-Man and the Masters battle Hover Robots, Horde Troopers and Skelecons throughout familiar Eternian locales such as the Mystic Mountains, the Evergreen Forest, the Sands of Time, Snake Mountain and of course, Castle Grayskull. Strangely enough, the game mixes things up occasionally by allowing the group to also crush unique characters who pop up repeatedly such as Rattlor, Tri-Klops and Clawful. Each enemy defeated drops gold that is used to unlock characters and their various power-ups. There is no really strategic or platforming skill needed for this game. Just swipe for normal attacks, tap for weak points and buy power-ups and characters with the in-game currency.

While He-Man and his Masters do fight bosses, they are much stronger foes that require the player to defeat them in 30 seconds. Weak points aid the heroes in dropping these bad guys faster. Failure to beat the bosses in time simply makes the Masters fight endless enemies until they grow powerful enough to beat the boss (Once, encountered, the player can go fight the boss at any time). The player doesn’t die in this game and the enemies don’t attack. No black magic from Evil-Lyn, no whipping from Beast Man, no panther form for Catra. The villains just pop-up to get wailed on by He-Man and his allies. 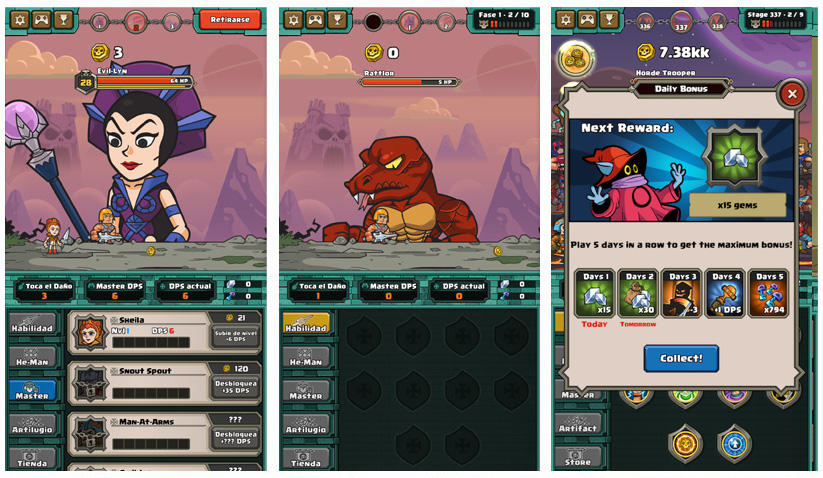 The game is free, but some players might find Tappers’ gameplay to be repetitive compared to the games that they might be used to. Tappers is a hack and slash game, that features a fun, on-the-go, nostalgic distraction while waiting for that bus or a train. Seeing who made it into the game and unlocking the many characters will probably be the main attraction for most MOTU fans. To keep players interested in visiting the world of Eternia, Animoca Brands plans to add more elements to the game with future updates!

What are you waiting for? Download Animoca Brands’ He-Man: Tappers of Grayskull for a fun romp through Eternia today!

The officially licensed Masters of the Universe poster subscription from Mad Duck Posters is on sale now! Enrolment is currently open, so sign up today!  Full details about this fine art poster club can be found here: CLUB […]