Masters of the Musical Universe
A review by Simon Springer

I recently had a once in a lifetime opportunity. Never in my life did I think I would have the chance to meet He-Man and Skeletor in the flesh, but on November 13th, 2015, that is exactly what occurred. That night I had the distinct pleasure of seeing the Masters of the Musical Universe in Portland, Oregon, a musical comedy tribute to He-Man and the Masters of the Universe. The show was written, produced and directed by Meghann Trause and John-Ryan Griggs who, to put it very bluntly, did an absolutely amazing job of translating my childhood passion and ongoing obsession to the stage. I was in Portland for a conference for a few days and only found out that the show was taking place in a limited run of four showings (November 12th to 15th) through HeManWorld.com on November 12th. The problem for me, but certainly not for the producers, was that all four showings were already sold out!

I made a post on the forum of this website indicating my dismay. After all, what are the odds this show was happening right at a time when I would just so happen to be in Portland? And, as the He-Man super fan that I am, I couldn’t get a ticket? In seeing my lament, our own Captain John Atkin got to work. He made some phone calls and within a few hours I had a message on Facebook saying that he had secured me a ticket to the show, but more than that, I would be able to meet with the producers, actors, and have a tour of set prior to the curtain going up. To put it mildly, I was thrilled! So I showed up to The Headwaters Theater on the evening of November 13th about an hour before the curtain was set to rise, and there a very friendly and enthusiastic cast and crew greeted me. They were all as genuinely as excited as I was to be there, and repeatedly told me how fantastic it was to have someone representing He-Man World and the Masters of the Universe fan community in the building checking out the show. 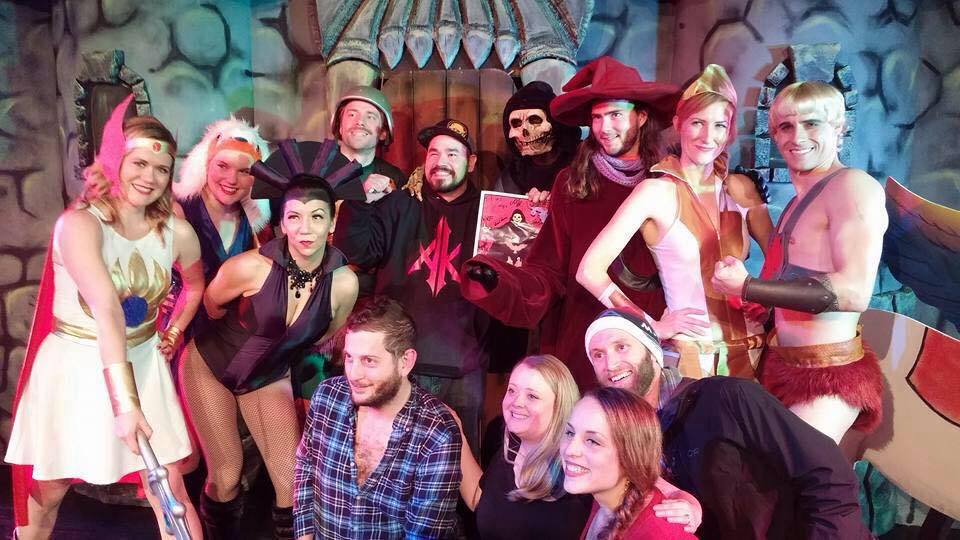 In my tour of the set I was able to say hello to all the actors, which included Dean Dwinn as He-Man, John Branch as Skeletor, Melissa Hanson as Evil-Lyn, Kellee June Korpi as Teela, Josh Edward as Man-At-Arms, Krystal Fields as The Sorceress, and Alex McCraken as Orko and Beastman. Last but not least, a rising star in the world of film and television, Jamie Langton of Portlandia fame, played She-Ra. She was easily the best singer of the night, and although I was not familiar with any of her work prior to seeing the show, it was clear to me afterwards that she had the chops to make it in the industry. I also spent some time with John-Ryan and Meghann, who answered my questions about the production and gave me a greater sense of their own motivations in bringing the world of Eternia to the stage. Both of the producers were childhood fans, and not only did they both play with the toys growing up, but they also watched the Filmation show. The set itself was handmade and constructed over a period of two weeks. They didn’t have a big budget or a lot of space to work with, but I have to say that their Castle Grayskull totally blew me away! They even let me get inside the Jaw-bridge and take a few pictures with the Power Sword in that classic transformation pose! 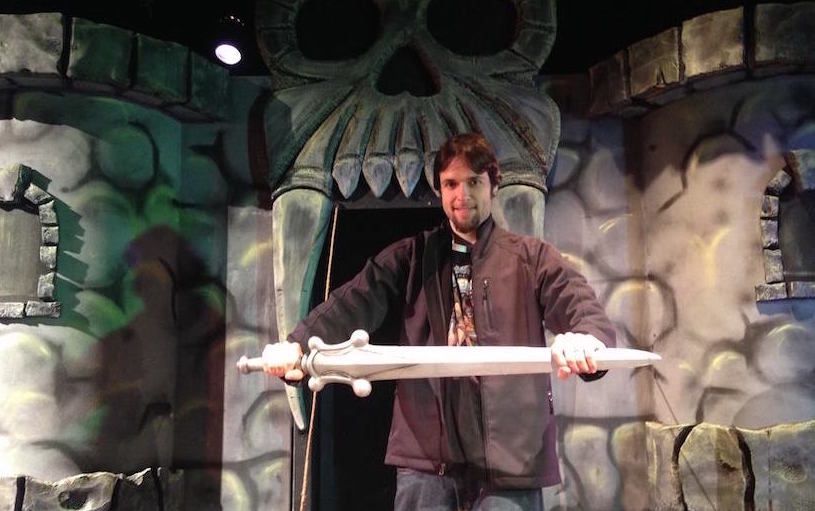 It was an adult oriented production, where the producers put their own spin on things with overtly sexual themes throughout the play. While not too raunchy or over the top, much of the humor would have gone over most children’s heads. My own kids wanted to come, and I’m sure they would have enjoyed it, but equally so they wouldn’t have picked up on the subtle humor. It is perhaps a bit cliché at this point to poke fun at the sexuality of He-Man, and this angle was the main point of humor that was being driven here. I suppose He-Man’s short-shorts loincloth and the fact that Prince Adam rocks a pair of pink tights makes the MOTU universe easy pickings for this sort of humor, as the Eternian wardrobe adheres to certain stereotypes within the LBGT community. The producers had fun with this while also ensuring a positive and progressive message. It kept the crowd laughing and was presented in such a way that really played with ambiguity, so that nothing about the relationships between the characters was made overt to the audience.

The plot itself was pretty straightforward. The Sorceress was used to provide an overview and background of the situation as the curtain came up to the familiar Filmation theme song. In short, a ‘Deterium Orb’ had been used to erase Teela’s memory, an advantage that Skeletor then used to turn her against He-Man and Man-At-Arms in an effort to secure his capture of Castle Grayskull. The producers wanted to stick fairly close to what most people remember about He-Man, and the Filmation series was their main point of reference. Of course they added their own twists, but much of the musical score and even particular character lines were drawn directly from Filmation episodes. Such ‘Easter eggs’ made for a fantastic homage and really got the crowd energized. This was most obvious in the performance of John Branch, as his take on Skeletor was straight out of the TV show. It was as though the cartoon character had actually come to life, and his Skeletor-isms completely stole the show. The audience was riotous with laughter as our beloved “bone face” delivered insult after insult at the “bungling fools” who shared the stage with him. There was even a lesson to be told by Orko at the end of the show, which was a nice touch and had the audience in stitches. 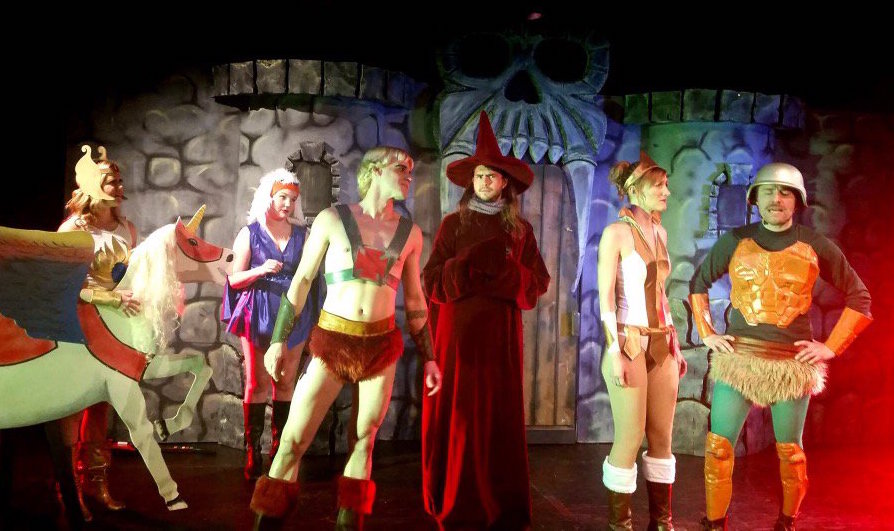 With the exception of two Britney Spears tracks, ‘Toxic’ and ‘My Prerogative’, and ‘Don’t Stop Me Now’ by Queen from the late 1970s, the soundtrack was entirely 1980s fare. Songs included Bonnie Tyler’s ‘I Need a Hero’, Madonna’s ‘Causing a Commotion’, Debbie Gibson’s ‘Electric Youth’, Laura Branigan’s ‘Self Control’, Tiffany’s ‘I Think We’re Alone Now’, Cyndi Lauper’s ‘Time After Time’, and Michael Jackson representing the lone male artist from that era with his song ‘Beat It’. The nostalgia was in high gear and the crowd absolutely loved it as the colorful cast of characters sang and danced across the stage to such familiar hits. There was much laughter in The Headwaters Theater that night and the vibe was electric. It was capped off by a standing ovation and an invitation for the audience to join the cast on stage for photo opportunities. It is an understatement to say that I had a fantastic time!

While there are unfortunately no plans to take this show on the road, the producers revealed that they might do a second run in February 2016. They also shared with me that they are considered a possible sequel to come sometime in the future. Although She-Ra was in the show, we never got the opportunity to meet Hordak or travel to Etheria. Meghann and John-Ryan both indicated that the Princess of Power side of things is something they would be keen to explore somewhere down the line, so hopefully their next stop is the Fright Zone and the Whispering Woods. Given the overwhelming success of this first act, it only makes sense to bring these larger-than-life characters back to the stage, and introduce us to other favorites like Mantenna, Bow, Shadow Weaver, Glimmer, and Madame Razz. If and when that actually happens, I know I’ll be making a return trip to Portland to catch the show. Until next time!

New from Mondo! This Limited Edition “Classic” Variant of Hordak (Power-Con exclusive) comes in a new blue color way, with a new “classic” head portrait and comes with the exclusive Imp mini figure. Other accessories […]

24 Reasons Avengers & Masters of the Universe are the Same Movie!

CinemaSins and Couch Tomato have posted a hilarious new episode that gives 24 reasons why Avengers & the 1987 Masters of the Universe are the same movie. Enjoy!