A message from MattyCollector.com:

December brings freezing temps but we assert the right to bare arms! Oh wait, make that the right to bear arms, as in two weapons packs and a place to store ‘em. Plus we’ve finally reached the end…
That’s right… it’s the last month of 2015! We’re finishing the year with He-Ro II, the son of He-Man® and Teela®, bringing the Classics line to a noble end. Big bad Prahvus™ wraps up Club 200X™, and we shed some light on the ongoing battle between good and evil with a special two-pack featuring Laser Power He-Man® & Laser Light Skeletor® (includes the last issues of the mini comic series). And be sure to check out all those weapons. Here’s the full list. 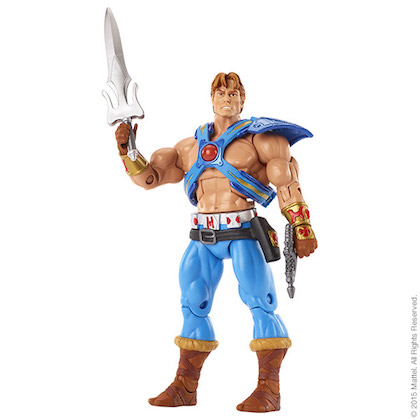 He-Ro II
Real Name: Dare
After He-Man returned to Eternia following the apparent defeat of Skeletor, he at long last wed his childhood friend and sweetheart Teela. Together they ruled over a peaceful Eternia, free at last from the factions that had fought over it for so long. But in his distant dimensional prison, the Unnamed One re-amassed power. With the help of Evil-Lyn’s son, he was released and struck out against guardians of the Sword of He. Dare, the teenage son of Adam and Teela, took his rightful place and claimed his father’s sword, becoming the new He-Ro, named for the legendary Wizard Warrior of Preternia. Using the Sword of Power, He-Ro fought the Unnamed One, eventually slaying him with the very power he once sought to control. 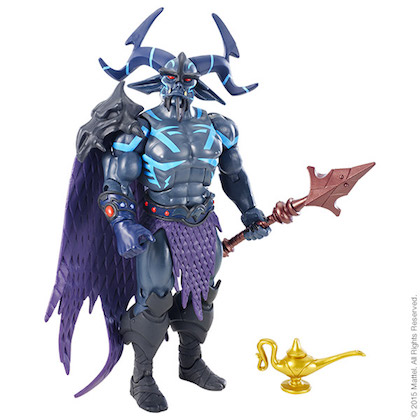 Prahvus
Real Name: Prahvus the Untamed
Released by Count Marzo from his magical prison, Prahvus the Untamed roamed throughout Eternia terrorizing the populace and causing havoc throughout the land. Marzo had intended to use Prahvus as a distraction, to divide Miro’s troops during the Great Unrest. But thanks to the heroics of Prince Keldor, Prahvus was contained again inside of a magical lamp. Decades later, after Hordak returned to Eternia, two of his bumbling minions released the warlord again, but this time, he was quickly enslaved to the Horde Invaders by Hordak’s chief witch. Prahvus uses his unstoppable strength and great magic to destroy any heroic warriors who get in his way! 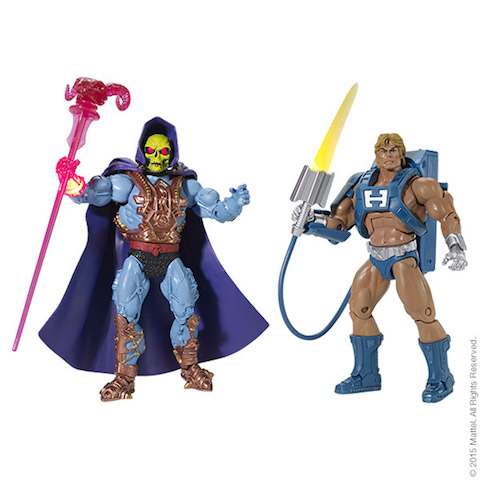 Laser Power He-Man
Real Name: Adam of the House of Randor
In the midst of their final battle with Horde Prime, He-Man and Skeletor simultaneously grabbed the Vortex Key, transporting them to Trolla. Finding himself on a world turned upside down, He-Man allied himself with the remaining Defenders of Trollan while Skeletor took command of the Unnamed One’s Revenge Squad, which was responsible for decimating much of the planet. Eventually, He-Man and Skeletor met on the Jaw Bridge of the great Temple of Power. Though both were enhanced by the Star Tree’s power and the Aura of the Gods, it was He-Man who became the ultimate victor, using the Sword of He to separate Keldor from Demo-man, seemingly ending the threat of Skeletor forever.

Laser Light Skeletor
Real Name: Keldor of the Tri-Solar System
After taking command of the Unnamed One’s Revenge Squad, Skeletor led his all new group of Evil Warriors against the Trollan’s defensive stronghold. Breaking into the Temple of Power using Horde Prime’s Vortex Key, Skeletor absorbed ultimate power from the Star Tree, gaining his Laser Light abilities. Preparing to flee, Skeletor was confronted by his old enemy He-Man on the Jaw Bridge Gate. In their climatic final duel, Skeletor was defeated when He-Man used the Power of Grayskull to separate Keldor from the demon that kept him alive. With a clear mind, in what he thought was his dying breath, Keldor gave his nephew the Vortex Key asking him to protect Eternia as the true ruler and heir to the throne.

What type of cartoon do you want for the next HE-MAN series?

If a new He-Man and the Masters of the Universe cartoon is made in the near future, what type of cartoon would you like to see get made? [poll id=”10″]

Update on Masters of the Universe Classics from Four Horsemen Studios

Toy designer H. Eric (Cornboy) Mayse of Four Horsemen Studios has shared some exciting news with He-Man fans on Facebook about Masters of the Universe Classics! Just so all of you MotU Classics fans know, we […]