Presented by the American Cinematheque, Dammaged Goods and Hemanworld.com

Based on the popular Mattel toy line, Filmation’s “He-Man and the Masters of the Universe” was one of the most popular animated children’s shows of the 1980s. Our celebration of the most powerful man in the universe kicks off at the Egyptian Theatre on Friday, September 18th with the live-action MASTERS OF THE UNIVERSE movie. Director Gary Goddard, Chelsea Field (Teela), Robert Towers (Karg), Anthony De Longis (Blade), and production designer William Stout appear in person for a post-screening Q&A. On Saturday, September 19th, The Egyptian Theatre is transformed into Eternia for a series of events beginning with a mini-convention of artists, collectors and vendors in the lobby. The festivities include a rare screening of the animated movie THE SECRET OF THE SWORD, followed by the West Coast premiere of TOY MASTERS, the recent documentary about the origins of “Masters of the Universe.” Filmation veterans Tom Sito, Larry DiTillio, Diane Pershing and Marc Scott Zicree, along with voice actors Alan Oppenheimer (Skeletor) and Melendy Britt (She-Ra), will be on hand for a discussion and to meet fans.

Tickets are on sale now, going for the astoundingly low price of $11.00 for Friday night and $15.00 for all day Saturday. You have the power! And Good Journey! 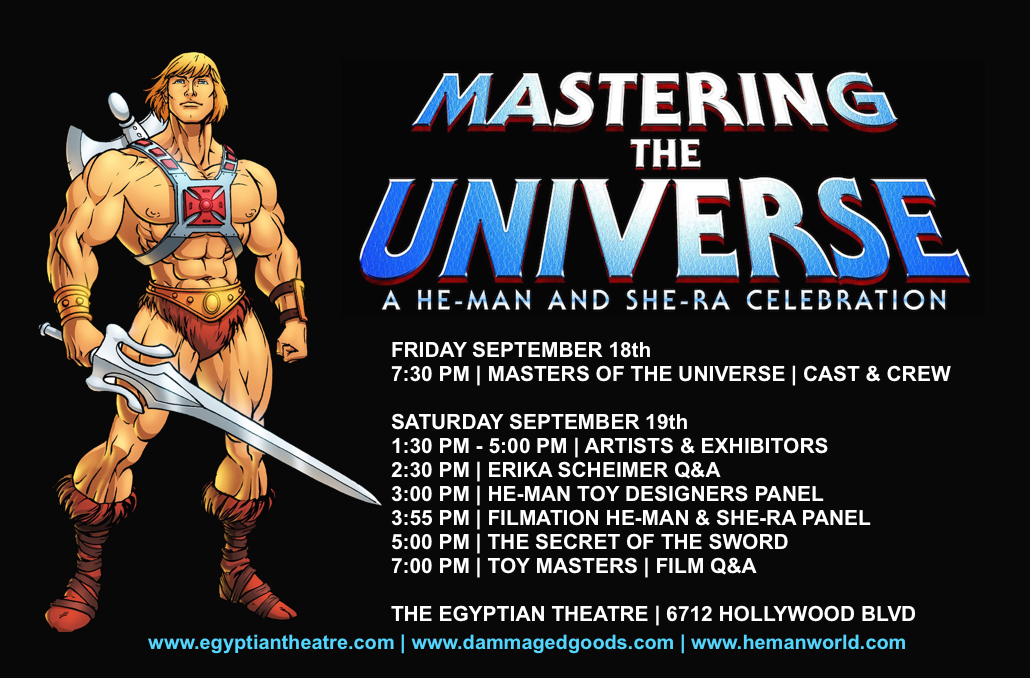 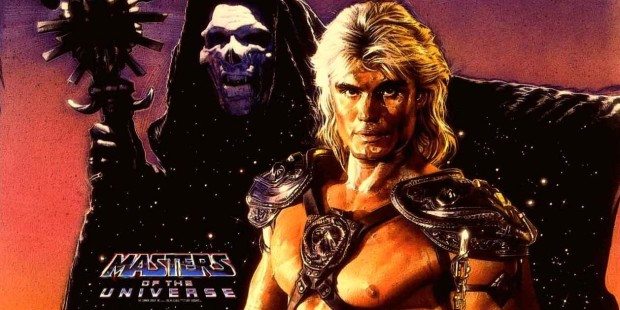 “I Have the Power!” A battle fought in the stars comes to Earth as the popular Mattel toy line comes to the big screen. After stealing a cosmic key, Skeletor (a perfectly cast Frank Langella) seizes control of the planet Eternia and is on the brink of ultimate power – unless He-Man (Dolph Lundgren) and his allies can stop him. Elevated by Bill Conti’s epic score, this underrated fantasy courses with pulpy energy – Marvel Comics artist Jack Kirby was a source of inspiration. With Billy Barty, Meg Foster, Jon Cypher, Chelsea Field, and Anthony De Longis.

1:30PM – 5:00PM: Doors open for a mini-convention in the lobby with exhibitors, voice actors and comic artists, followed by discussions and screenings in the auditorium:

2:30 PM: “Building A Universe, Creating A Legacy”
30 min.
Erika Scheimer kicks things off with a discussion on all things Filmation, her father Lou, voice acting and song writing for He-Man, She-Ra, Ghostbusters and more.

3:55 PM: “Filmation He-Man & She-Ra”
45 min.
Hear the behind the scenes stories of the Filmation cartoons from the people who made the magic happen! Discussion with Tom Sito, Larry DiTillio, Marc Zicree, Melendy Britt, Diane Pershing and Alan Oppenheimer. 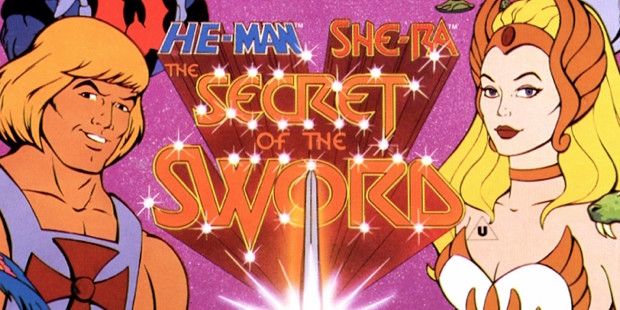 As the Great Rebellion battles the Evil Horde on the war-torn planet Etheria, Princess Adora finds herself drawn to the magical Sword of Protection. Adora magically transforms into the powerful She-Ra when she raises her sword and says “For the Honour of Grayskull!” Heart, humor and action ensues with the help of robots, talking trees, and a flying unicorn in this imaginative kid-friendly adventure.
7:00 PM: TOY MASTERS – West Coast Premiere!
2012, 97 min. 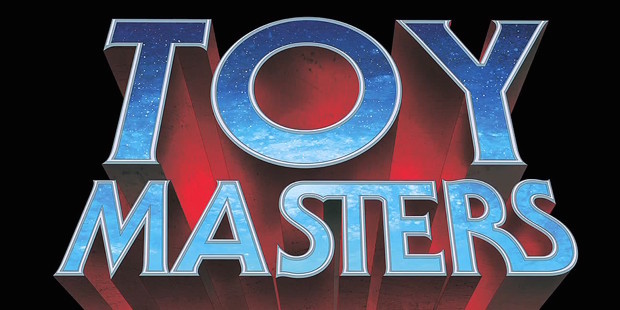 Directors Corey Landis and Roger Lay, Jr. had no idea what they were getting into when they sought out the origins of their favorite childhood action figure, He-Man of the popular “Masters of the Universe” animated TV series. As this documentary reveals through numerous interviews, credit for the billion-dollar franchise remains in dispute 30 years after its launch.
Discussion following with directors Corey Landis and Roger Lay, Jr.
Ticket Price For This All-Day Event: $15. No vouchers accepted.

Check out this cool preview of He-Man by The Loyal Subjects. The figure will be part of their upcoming Masters of the Universe Action Vinyls roster. These figures will be fully articulated and come with […]

Pixel Dan catches up with Brian Flynn at the New York Toy Fair to talk about the exciting new Masters of the Universe toys from Super7. SUBSCRIBE to Dan so you never miss a video! FOLLOW Dan on […]

A message about the new MOTU Target Exclusives from The Loyal Subjects: Hello He-Man fans!  TLS just launched another MOTU exclusive and it’s ONLY available at Target!  Items are hitting the shelves as we speak so […]