Exciting news from the most powerful game in the universe! New tournaments modes and double the medals in a special update coming soon from He-Man Tappers of Grayskull! Each tournament will last one week. To find out more, keep a look out here as we’ll post it when it goes live!

Tournament #1: (March 18 – 24). Defeat Skeletor as many times as you can in the tournament to come out on top!

Tournament #2: (March 25 – 31). Level up all your Masters as many times as possible, because the ones with the highest total Master levels will be the tournament winners!

Tournament #3: (April 1 – 7). Strike as many weakpoints as you can to win this rounds of tournaments! Remember, this is your last chance to get double the amount of tournament medals! 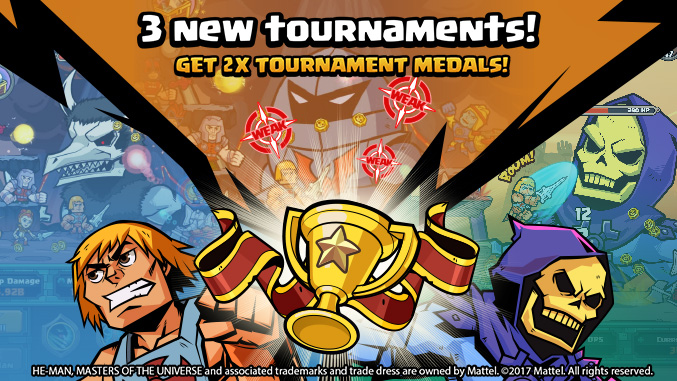 Happy Masters of the Universe Day!

As decreed  in 1987 by Los Angeles Mayor Tom Bradley, April 28th is Masters of the Universe Day! The day was created in recognition of the POWER TOUR that was running through LA at the time, and […]

The limited edition variant MOTU poster by Mad Duck Posters is on sale now! Entitled “The Battle for Grayskull”, this poster captures an epic battle between the forces of good and evil on Eternia, as […]

MUSIC from ETERNIA – The Chase (re-recording)

Check out the latest instrumental track at the OFFICIAL He-Man and the Masters of the Universe Youtube channel — The Chase.