1. How did you get in touch with Jerry Macaluso and Pop Culture Shock Collectibles?

Oddly enough, our first contact wasn’t about He-Man: we actually met on Facebook chatting about Micronauts. Jerry’s never-released prototypes for SOTA toys really impressed me back in the day, and I had just done some work for the Hasbro promotional comic for NYCC (which included Micronauts), so we got to chatting a bit. When Jerry was chasing the license for the Masters of the Universe statues, he asked me some to give him some suggestions about what style to use, and then I asked him if I could help design the statues.

2. What are your duties when working on one of the Masters of the Universe PCSC statues?

When we started, Jerry was kind enough to consult with me about the character line-up. We came up with a series of must do and maybe, to see if there was enough support into expanding the line. With such high price point, it’s important to keep our feet firmly on the ground with what can actually be done with a 1:4 statue. Other than He-Man (which was the iconic transformation pose), my job is to come up with the design of the statue, the pose, and then the base and what the possible exclusive parts for the PCSC website version could be. After a few sketches, we select the best one, or tweak them until we get exactly what we want. Once the sculptor has started with the digital model, I help with the art direction. I check every step of the sculpting process and provide feedback so all the details, proportions and colors are 100% accurate to the Filmation cartoon. The last step for me is creating the graphics on the box, which feature new Filmation inspired bios by James Eatock. 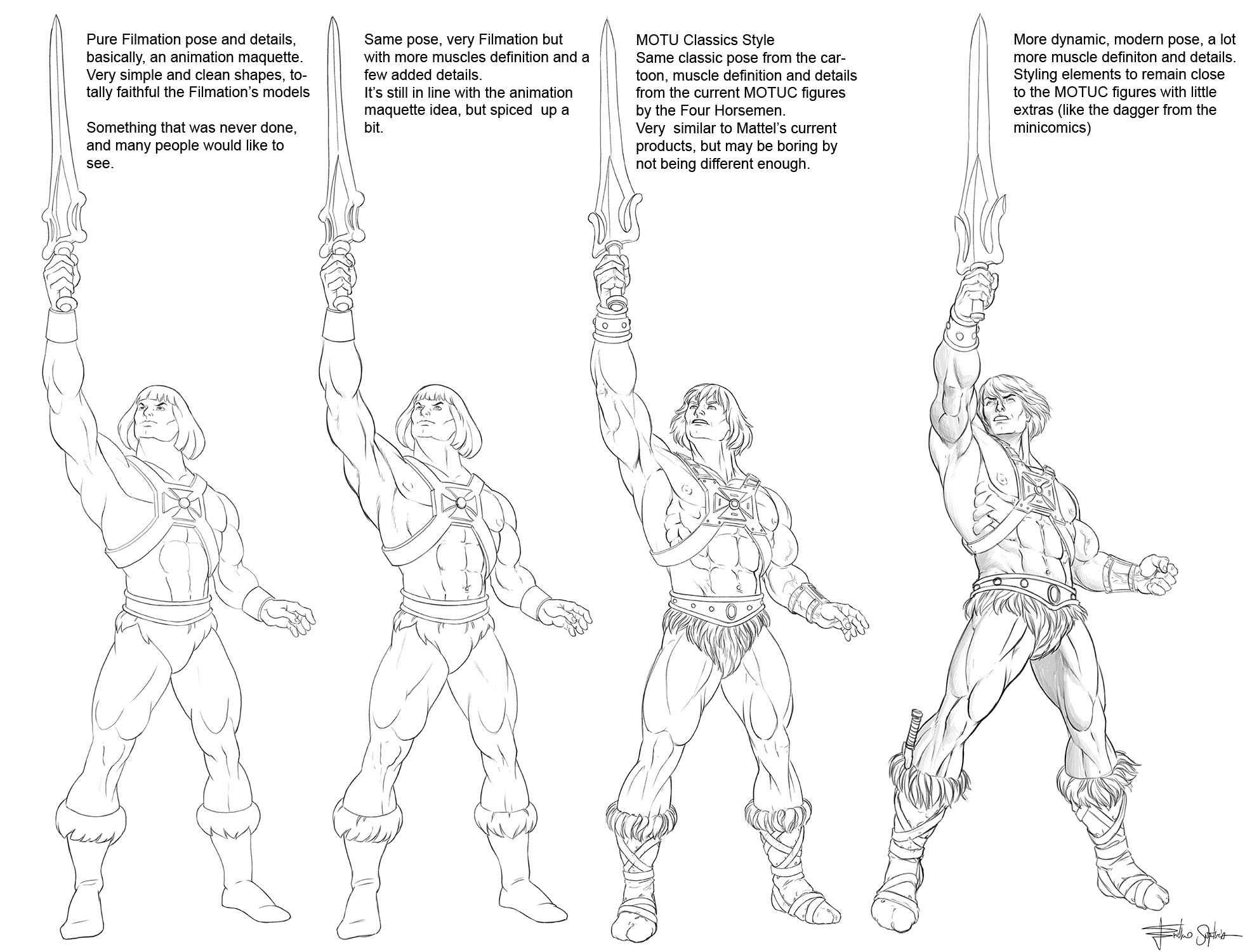 3. What is your approach to the design of the statues?

I always start from the original source material. The Filmation model sheets are my bible. Since the beginning, the goal was to stay true to the original material and give the best representation of each character within the boundaries of that style. Not just the details, but also the pose, the gestures, the facial expressions, and the accessories that we decide to display with them. Even the base must reflect the personality of the character in the cartoon. I’m grateful that I have good friends like James Eatock and Eamon O’Donoghue helping me out on these. It has really helped to discuss a character personality and from that conversation, I could imagine what would be the most appropriate pose.

Sometimes the process is easy, while other times it may take a bit of exploration before finding the right sketch (see the Teela image). I look at the models, scenes from the cartoon, and promotional materials to capture a certain style in the way the characters moved. We also decided to slightly push things a bit in terms of their poses. Nothing that would deviate from the cartoon too much, but just that extra movement or gesture that help make each statue really unique. 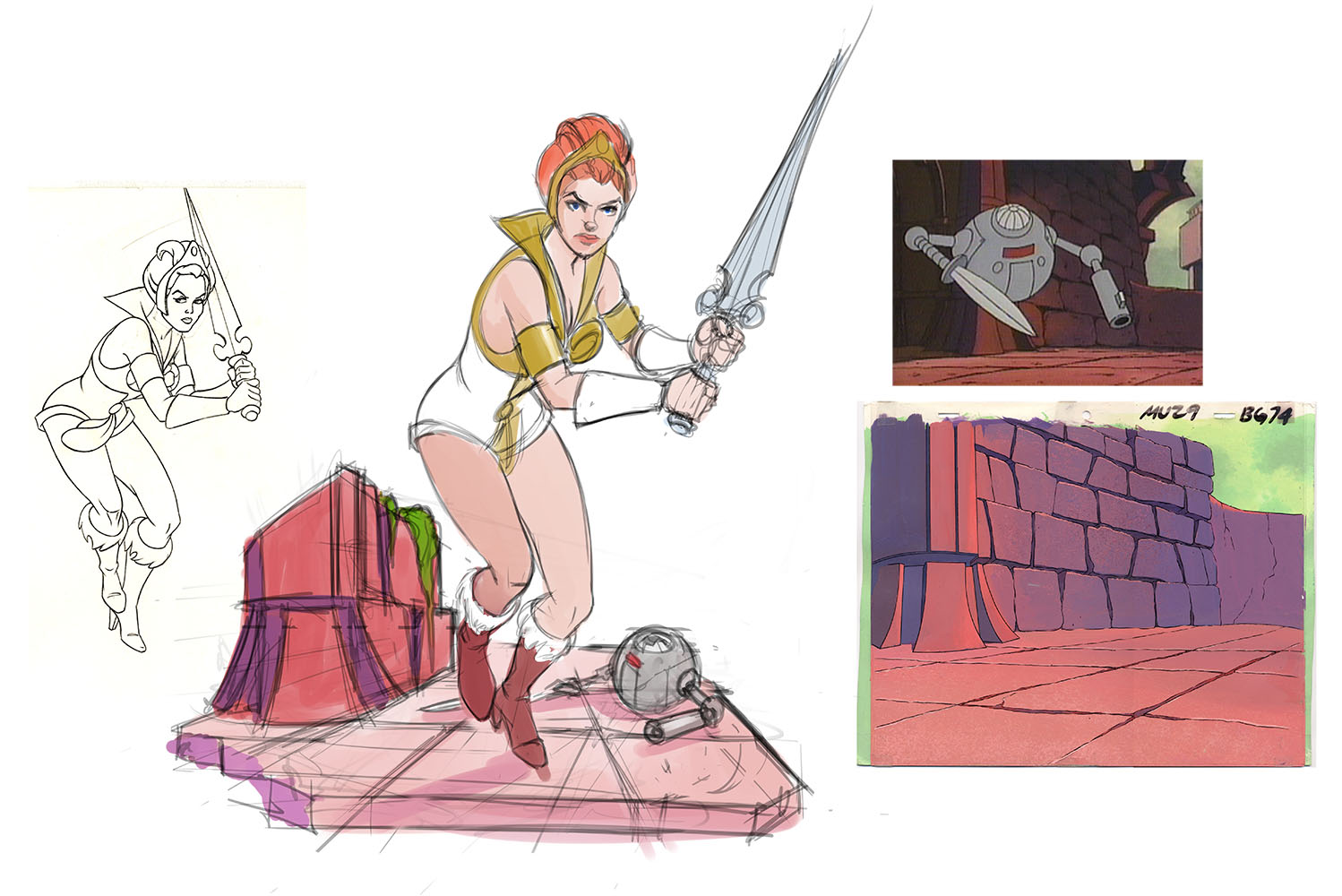 4. What part of designing Masters of the Universe statues do you find the most challenging?

The bases can be a real challenge. They are such an integral part of the statues, and a lot of thought goes into their unique designs. Some, like He-Man, can be an iconic piece of background from the cartoon series. For other characters, we really had to look at the cartoon and find cool ideas that would make sense for the characters, like elements from episodes they were featured in, and that are executable in the relatively tiny space we have to work with.

5. Were any of your previous work experiences helpful in designing the statues?

Absolutely! The work I did on the Masters of the Universe and Princess of Power DVD boxsets in 2005/2006 was a tremendous help. That experience taught me a lot about Filmation and got me accustomed to execute art in that style and understand it. But all the jobs I did brought something: Six years as a toy designers really help you visualize a 3d object and what is cool as a product. And my experience in comics helped too with creating exciting poses that are telling a story in their own and in making quality sketches that are a clear guide for the sculptor. 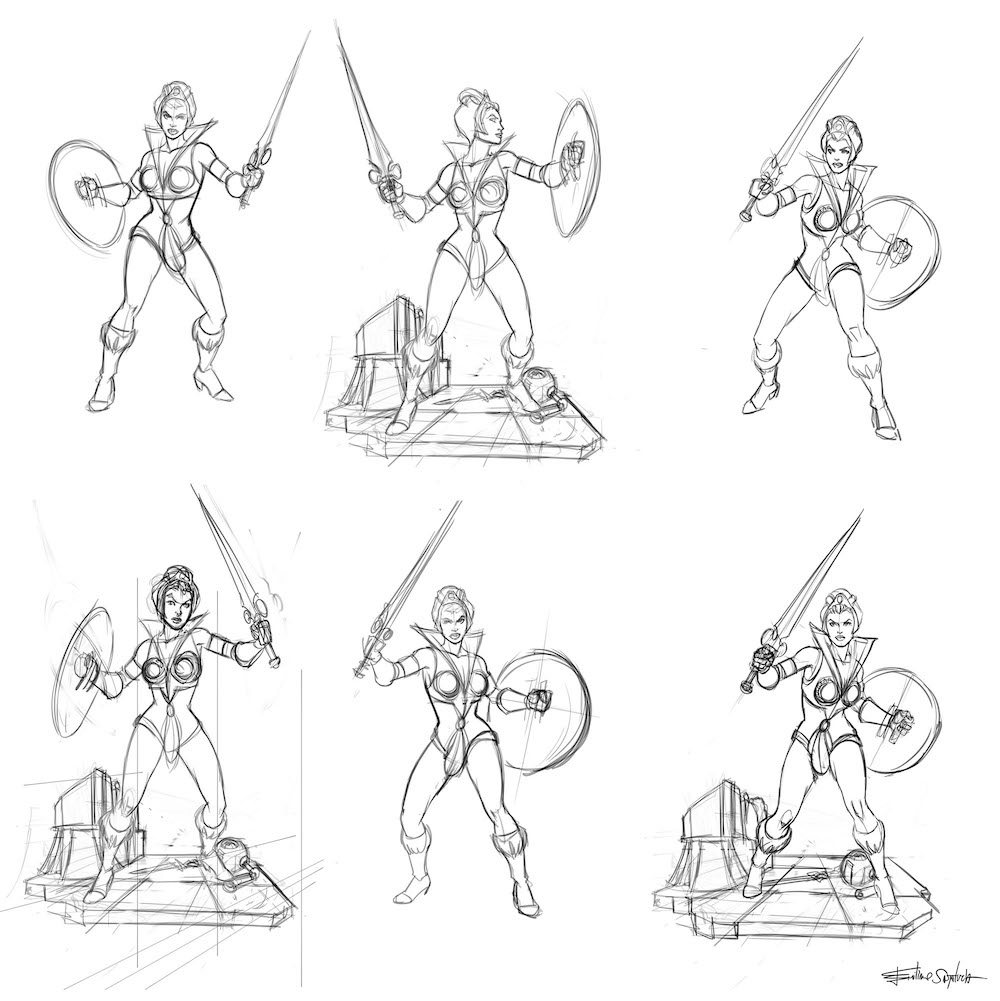 6. Do you have a personal favorite character from MOTU that you would like to see made as a statue?

I was lucky to have got most of my favorite characters already sculpted or in the process of being sculpted already, but if I could add one to the mix, it would be Filmation Mantenna. I love that goofy guy! For the mixed media statues, I’d love to have a badass Teela, where we could really enhance all the armor elements and bring back some of the cool details sketched by Mark Taylor.

7. What are you most proud of with the statues you worked on so far?

From a pure artistic point of view, I would say Teela. Her design was very challenging for me, and required a lot of sketches. There was a moment I rotated a leg in a specific way, and all of a sudden I had exactly what I wanted. That was great for me. As a statue overall, I think the Sorceress. Thanks to Eamon that kept asking me, we did that extra tweak in the pose I was mentioning above. She is still in her classic pose, but she’s just a tad more sensual and interesting. The Sorceress also has a majestic design to begin with, so with that added detail I knew we had a winning product, and fans seemed to really appreciate it! I’m also very proud of the trust Jerry and his company put in me. He believed in my skills and knowledge of the MOTU world, and gave me a chance to stretch those skills in what was a relatively new experience for me. I will always be grateful to him for that. 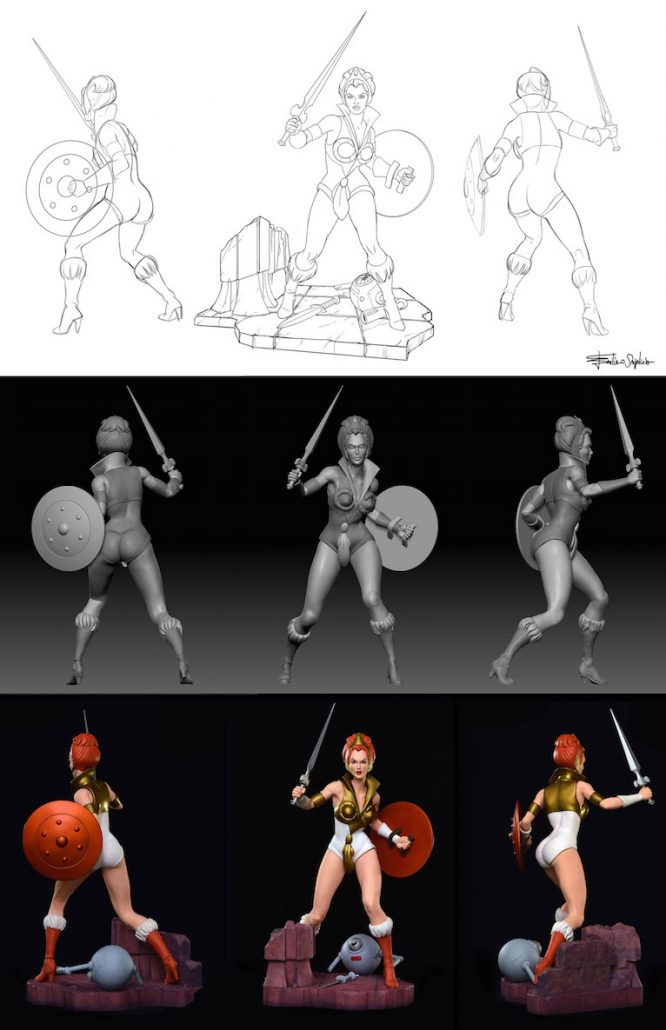 Many thanks to Emiliano for taking the time to answer our questions. Come back on Monday for Part 3 of our PCSC interview series, featuring designer Eamon O’Donoghue.

The Havoc Cuff from Han Cholo!

Channel all the power and energy around into The Havoc Cuff to defeat the enemies around you. Skeletor’s favorite weapon, with the power of the Crystal Ball safely enbeded in the cuff you’ll be ready […]

The Most Evil Being in all of Eternia is back! Check out these new Skeletor rings from Han Cholo’s awesome Masters of the Universe collection! There has never been a moment of peace in Eternia, […]