I am proud to present the completed painting “He-Man and the Power Sword” – my homage to Alfredo Alcala’s Artwork on the very first He-Man mini-comic cover. The painting is the second Alcala mini-comic cover that I converted into an oil painting. The first one was “King of Castle Grayskull”, which you can find in my Facebook gallery.

I have been a fan of He-Man since the very first hour and my intention was to combine the beloved first mini-comic covers and the awesome boxart styles of Rudy Obrero and William George, because those were the very first MOTU media ever – and these were the imaginations that caught my eye as a kid.

After getting a great response for the first painting I decided to make a second one that was much bigger than the first. Meanwhile more and more German MOTU fans knew my work – so this time the first steps were realized at Germany’s Grayskull Convention in 2014. I made a 10-hours live panel painting the background with Castle Grayskull (*photo by Jukka Issakainen). After that – in a process of almost four months – I included the characters. I did it in due consideration of feedbacks by members of the German Planet Eternia forum and some chummy experts like Björn Korthof and Jukka Issakainen – we discussed the question of who will be at the laser cannon for example. 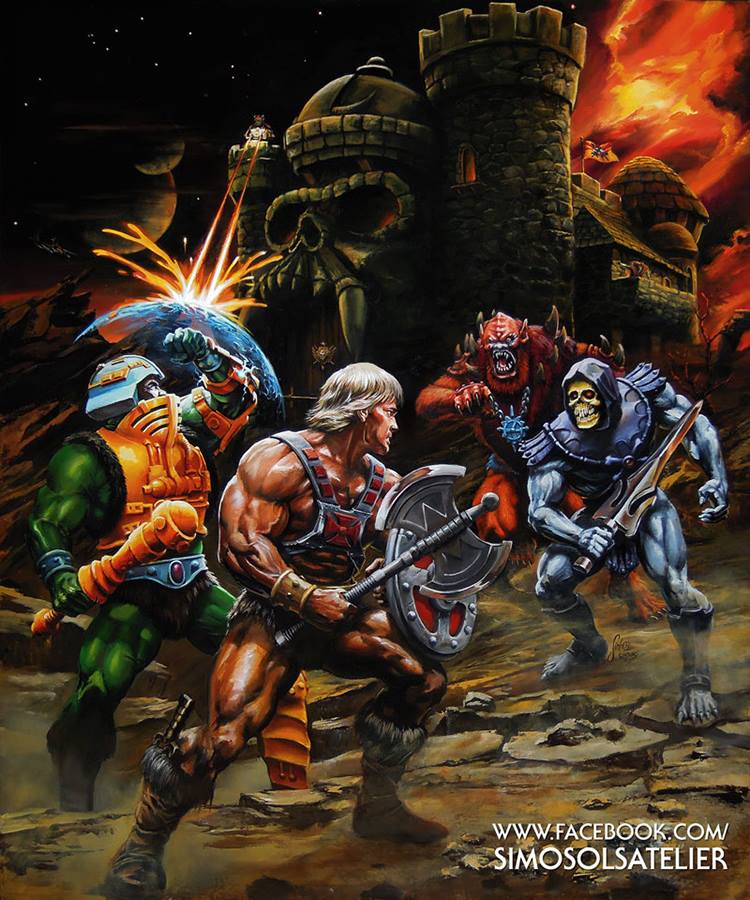 You can check out more amazing artwork at the artist’s blog at SiMo Sol’s Atelier.

See what the fans are saying at the HMW forum by clicking HERE!

Check out this amazing custom “God” Skeletor, based on the character played by Frank Langella in the 1987 Masters of the Universe film! This figure was made by Matthew Hackley, and was commissioned by He-Man […]

Via CBR, DC Comics have revealed that a new mini-series called He-Man and the Masters of the Multiverse will be coming out, with the first issue being released on November 20th, 2019. The six-issue limited series comes from […]

Check out the awesome new photos of the 1:4 scale Filmation Sorceress statue from Pop Culture Shock Toys! Based on the classic Filmation series, The Sorceress is the mistress and guardian of the Secrets of Castle […]