I’d rather be Skeletor… I give you my word I’d be believable. 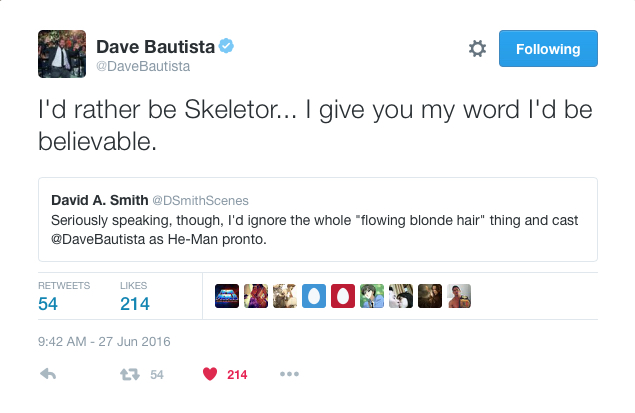 Word quickly travelled to Director McG, who simply had this to say:

Masters of the Universe is based on the popular Mattel toy line, and spawned several animated series (including the spin-off cartoon series, She-Ra: Princess of Power), along with a 1987 live-action film starring Dolph Lundgren as He-Man and Frank Langella as Skeletor. The main premise of the series revolves around the conflict between the heroic warrior He-Man and the evil Skeletor on the planet Eternia, with a vast line-up of supporting characters. Masters of the Universe takes place in a hybrid setting of medieval sword and sorcery and sci-fi technology.

Artist Sam Chou has revealed at Style5.tv that the animated HE-MAN short “He-Man: First Snowfall” will be playing at SDCC! Two years ago, things came full circle and I had the opportunity to pitch Mattel […]

Super7: Masters of the Universe Apparel at Skeletor’s Lair!

Super7 will be hosting a “Skelebration” at their Skeletor’s Lair pop-up shop during Comic-Con International next week in San Diego, California. Here is a look at the new Super7 MOTU apparel that will only be […]

Promotional Image from “The Return of Faker”