He-Man fan Joe Amato has started a “Bring Back The Meteorbs!” petition at Change.org. 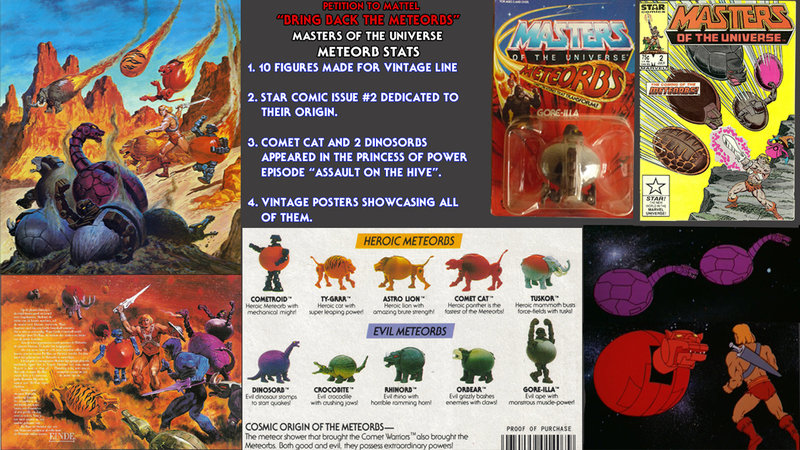 Ever since the debut of Masters of the Universe Classics back in 2008 we have seen every faction represented except one, and that is The Meteorbs. Fans have waited all this time to see The Meteorbs return and they still have not been brought back. They deserve to be made into figures as they have a lot of history with Masters of the Universe. Ten figures were made for the original Masters toyline back in the 80’s, issue #2 of the vintage Star/Marvel comic dedicated an entire story to them, Comet Cat and Dinosorb were represented in the Princess of Power cartoon episode “Assault on the Hive”, and some fantastic posters were drawn depicting them with one being drawn by the late great Earl Norem. So with all of that being said, if you would like The Meteorbs to be made once again please sign this petition so we can show Mattel the fans want them back! Thank you for your time! “Have a powerful day!” ~Joe Amato

Letter to
Mattel
“Bring Back The Meteorbs!”

You can sign the “Bring Back The Meteorbs!” petition by clicking HERE!

You can also vote in our Meteorbs poll below:

See what the fans are saying about the Meteorbs at the HMW Forum.

Sony Pictures Announces Release Date for Masters of the Universe!

Update: Entertainment Weekly is reporting that McG (Terminator Salvation), who has been on board to direct the long-discussed Masters of the Universe reboot since early 2016, is no longer attached to direct the movie. EW has learned from a source […]

Sideshow Collectibles is having a FREE He-Man statue giveaway contest! Enter for Your Chance to Win! To celebrate the holidays we’re giving away a Masters of the Universe collectible! Get your entry now and you could […]