An update from MattyCollector on the upcoming King Hssss action figure.

We’ve been reading the boards and we understand there is a lot of frustration with our favorite slithery foe, King Hssss. We get it – certain things were expected and then those things changed, which is frustrating. It is also frustrating when statements like the ones that were made regarding the Snake Hssss Torso, are put out to you, the fans, before their feasibility has been confirmed. That’s what unfortunately happened here.

As we tried to rise to the challenge of somehow offering the King Hssss Bendy Snake Torso as an added bonus to an upcoming figure, we came to the conclusion that it was just impossible to make it work financially and still offer a product at the $26 price point for the sub. The Snake Torso itself is the cost of a regular MOTUC figure, so trying to just “throw it in” with Buzz Saw Hordak would have made the retail jump to the price of a two pack, which we didn’t want to do. And let’s be honest, that’s exactly why it wasn’t included with the original King Hsss in the first place (where it would have made a lot more sense).

We still really wanted to offer the Torso, because it turned out absolutely fantastic. So we decided to offer it as its own item – a complete figure – instead of not doing it at all. Soooo we worked closely with the Four Horseman and eventually came up with this offering.

What you’ll get is a Full Snake Form King Hssss figure which includes the new Bendy Snake Upper Torso with a repaint of the Snakemen lower body, and the King Hssss Briefs. You’ll also get a Bonus Transforming King Hssss Head (Snakemen Repaint) that can work with either of your King Hssss figures and some new repaints of the Snake Men Weapons. Overall we feel this is a more complete offering than just a torso in a polybag, and allows for customizable options with the original figure.

We understand it’s not exactly what you were expecting, and that some of you aren’t happy about that. But we hope you see that we are trying to offer you the best product possible, and in order to do that sometimes things have to change. 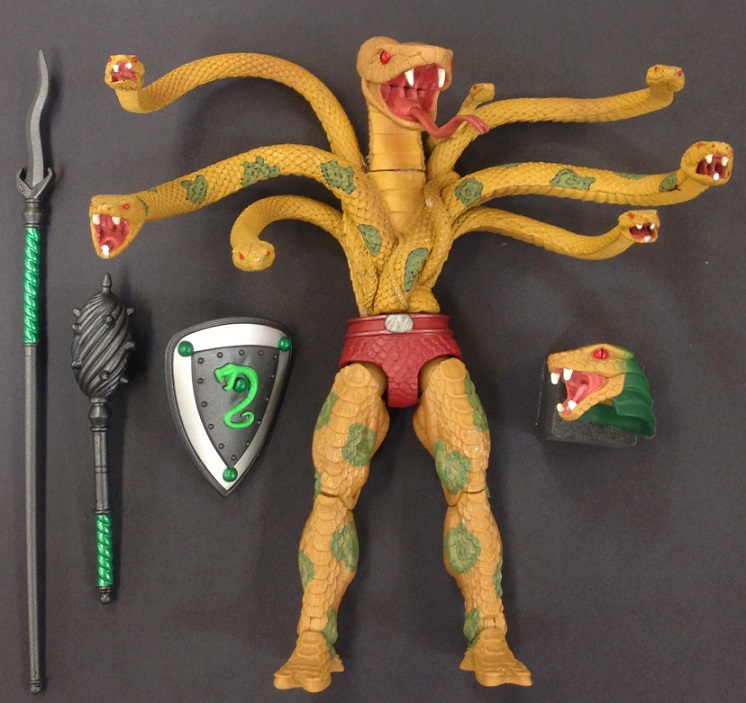 See what the fans are saying at the HMW forum by clicking HERE!

In The Shadow Of Snake Mountain by Carlos Valenzuela

Mad Duck Posters has just released a fantastic new poster by artist Carlos Valenzuela. The poster is available in two different versions of the art. The regular version features Classic He-Man fighting King Hiss, and a […]

Factory Entertainment To Produce Licensed Masters of the Universe Collectibles