He-Man fan Brian C. Baer has reached out to us to discuss his upcoming book “How He-Man Mastered the Universe” , an unofficial guide from McFarland Publishing.

How He-Man Mastered the Universe

In a world of movie tie-ins and “cinematic universes,” it’s easy to forget that the transmedia trend began with He-Man. From his creation in 1982, the blond, sci-fi barbarian battled his way across toy store shelves, the pages of comic books, the pixels of video games, multiple animated series, and even a Hollywood movie. Along the way, he changed the way we were entertained: the beloved cartoon “He-Man and the Masters of the Universe” was the first animated series based on an action figure, and the 1987’s cult classic “Masters of the Universe” (starring Dolph Lundgren and future Academy Award nominee Frank Langella) was the first time a toy became a live-action feature film. But this new ground was not broken easily. He-Man faced adversaries more dangerous than Skeletor: entertainment lawyers, shady Hollywood executives, and even the Reagan administration.

This sly and scholarly book breaks down the history of He-Man and the Masters of the Universe, from the characters’ contentious creation to their big screen breakthrough and beyond. The heroes and villains of Eternia did more than shape the childhoods of the toy-buying public, they also introduced the modern landscape of entertainment.

Brian C. Baer is a lifelong He-Man fan and pop culture writer from Spokane, Washington. His first novel, “Bad Publicity”, was published in 2015. He can be found on Twitter @briancbaer 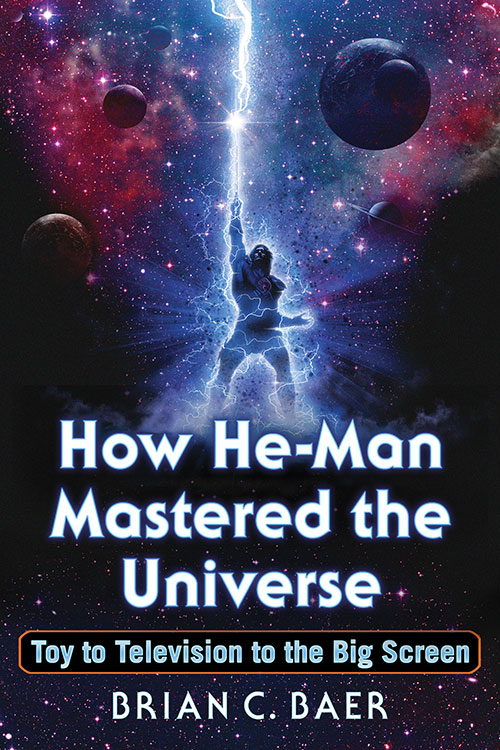 Pop Culture Shock Collectibles has embarked on their most ambitious collectible yet! An enormous pair of complementary 1/4th scale statues depicting He-Man and his trusty steed Battle Cat! In this video, artist Eamon O’Donoghue unboxes […]

In this video review, artist Eamon O’Donoghue of The Hottoycast unboxes the upcoming Skeletor (Hot Topic Exclusive).  The figure is part of the Masters of the Universe 1/6 Scale Figure line from MONDO!  Skeletor features over […]