HeManWorld.com, Rainbow Cinemas and Commissionaires – Great Lakes are working together to coordinate a toy drive for the children of Syrian refugee families. As part of Canada’s commitment to accept 25,000 Syrian refugees, Ontario is welcoming a number of refugee families — many of whom have young children. This special screening of the 1987 Masters of the Universe movie is doubling as a Toy Drive to offer toys to Syrian Refugee families. Attendees are encouraged to bring a new stuffed animal, boardgame, or toy to donate to the drive.

MattyCollector.com and Super7 have generously donated cool toys to give away as prizes to attendees at the screening. See you at the movies!

Masters Of The Universe

Action, Adventure, Fantasy
“I Have the Power!” A battle fought in the stars comes to Earth as the popular Mattel toy line comes to the big screen. After stealing a cosmic key, Skeletor (a perfectly cast Frank Langella) seizes control of the planet Eternia and is on the brink of ultimate power – unless He-Man (Dolph Lundgren) and his allies can stop him. Elevated by Bill Conti’s epic score, this underrated fantasy courses with pulpy energy – Marvel Comics artist Jack Kirby was a source of inspiration. With Billy Barty, Meg Foster, Jon Cypher, Chelsea Field, and Anthony De Longis. Directed by Gary Goddard. 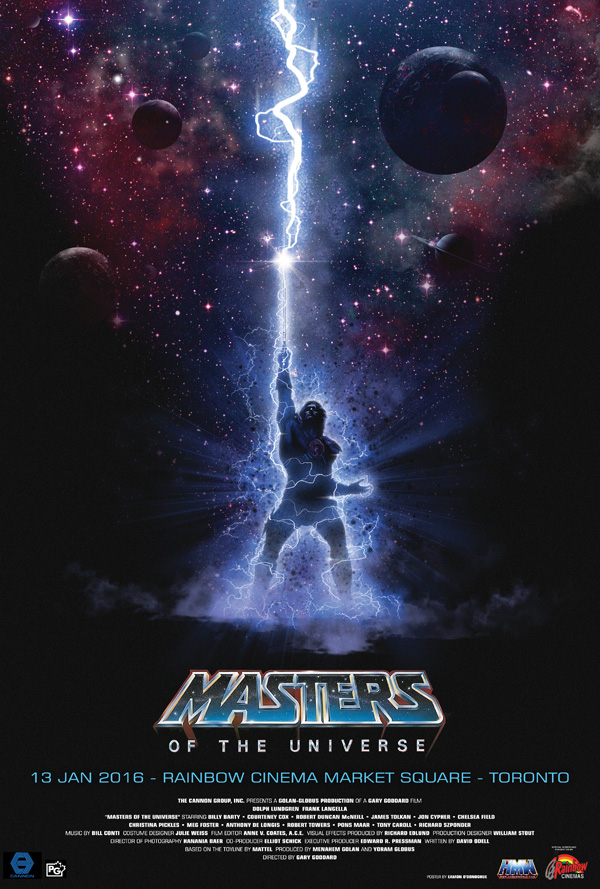 “Evil-Lyn – Spying from the Shadows” by SiMo Sol

Simon Soltau (AKA SiMo Sol) has created another stunning Masters of the Universe painting. “Evil-Lyn – Spying from the Shadows” is inspired by classic toy packaging artwork by Errol McCarthy. Check it out! And here […]

The Unofficial Cartoon Guide to He-Man and the Masters of the Universe is written by James Eatock. This is a must have for fans of the classic Filmation cartoon! Check out the video to learn […]