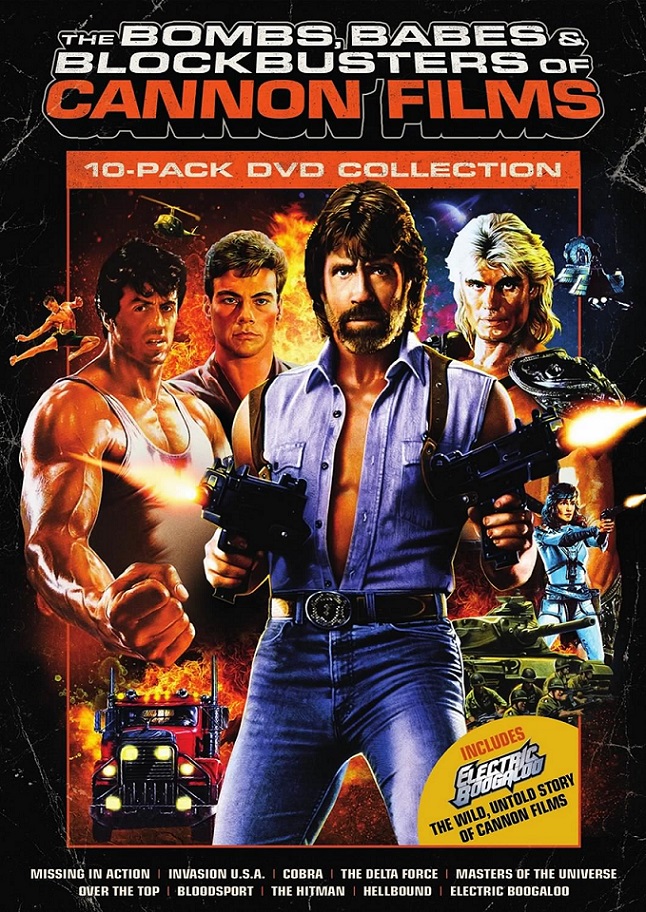 Warner Brothers is putting out a 10-Disc CANNON FILMS DVD collection this September!

Masters of the Universe (1987)
A group of freedom fighters, led by the heroic He-Man (Dolph Lundgren), attempt to stop the evil Skeletor (Frank Langella) from taking over the planet Eternia.

Missing in Action (1984)
Chuck Norris is an American officer who launches a mission deep in the jungles of Viet Nam to free American POW’s from General Trau.

Cobra (1986)
Sylvester Stallone is a one-man assault force who must protect a witness (Brigitte Nielsen) from an army of psychos bent on slashing their way to a “New Order.”

The Delta Force (1986)
When a U.S. passenger plane is hijacked and taken to Beirut, the President calls in a crack team of commandoes led by Chuck Norris and Lee Marvin to rescue the hostages.

Over the Top (1987)
Sylvester Stallone stars as a hard-luck big-rig trucker who tries to rebuild his life by winning a wrestling championship and the love of the son he abandoned years ago.

Invasion USA (1987)
When America faces invasion by an army of terrorist mercenaries, it’s up to one-man army Matt Hunter (Chuck Norris) to wage war upon the enemies of freedom.

Hitman (1991)
A good cop (Chuck Norris) who is betrayed and left for dead by his crooked partner survives and goes undercover as a hit man for the mob in order to exact his revenge.

Hellbound (1994)
Chuck Norris stars as a Chicago policeman who, while on a murder investigation in the Holy Land, discovers a powerful satanic messenger has been restored to life.